In September 2017 a devastating hurricane passed through the island of Saint Maarten. Hurricane Irma destroyed almost everything causing many people to lose their homes, cars, and jobs, as the local economy lives on tourism and made with which many abandoned their lives there, because it was impossible to continue because of a lack of structure.

The Ukrainian clown Albina Matuzko, a resident of SXM for 7 years, made a worldwide call to the clowns, asking for psychological, affective and emotional support. Clowns Without Borders Brazil responded to this “invitation” and in partnership with Clowns Without Borders USA and UK sent 3 clowns to work with Albina. There were 10 intense days of school presentations, which was the most practical way to reach as many people as possible, since many places were abandoned due to destruction. On the French side of the island, the most destroyed were 3 schools, and on the Dutch side were almost all, missing only 3. In addition, the clowns made interventions in needy neighborhoods, visited homes, and presented to local communities, providing moments in family.

During the stay they had the support of a local Pineapple’s Pete restaurant who provided free food to the 4 staff members, local journalists who photographed and wrote about the actions and impact of the work done!

Behind the Beyond Community Theatre of sxm 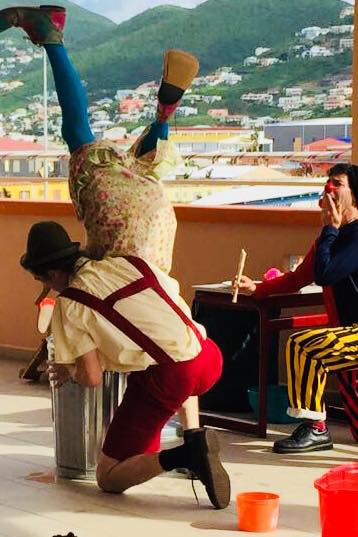